Luis and I were talking the other day and he brought up that VDH had been going for more than a decade now and thought it might be nice to share some of the highlights for all the new double hose divers out there who have not been around since day one.

In 2004 though the magic of the interweb I stumbled upon Vintage Scuba Supply while looking for information about a regulator I wanted to buy on E-bay  similar to one my older brother had given me as a kid.  I’m sure most of you know Dan’s site as it was the original one dedicated to vintage scuba gear.
After getting the DA Aqua-Master from E-bay I became very frustrated in the fact that there were no NEW parts available to service the regulator with.  I was basically instructed by the VSS message forum members and Dan to simply clean up the old parts and put them back in the regulator and that would be good enough.
Back in the old days when being a diving instructor was my full time job I regularly attended classes for regulator service and did this at the various stores I worked at over the years. I was very familiar with how one should and should not rebuild one and reusing  50 year old parts was not an option.  I fully understood that no new parts were available for double hose regulators  but was not willing to accept “Thats just how we do it” as the right answer.

So I took the parts I could get out of the DA I purchased and started searching contacts I had in manufacturing asking them to reproduce the part. When I could I wrote out specs and did rudimentary drawings but for some parts I simply had to mail in the only one I had, ask the company if they could make it and how much to make it and if the could not help me then could they please mail back the sample part since I did not have any spares and needed the one part they had to put the DA back together so I could go diving.

At the time there were many posts about C-clips for the cans and how there were no spares available.  If you could find someone with a stash of them they treated them as if they were gold plated and charged $5.00 each for a part everyone HATED to begin with.
So I took the 7 that came on the DA I had purchased and sent one to 7 different metal fabrication shops that I either knew or was able to source from a huge Thomas Register resource directory I had.
6 out of 7 replies were either Not Interested or Too High for me to afford since the quantity I was asking for was only 500 pieces. One of the 7 replied that they could make them and the price was right and a month or so later I had C-Clips to sell. 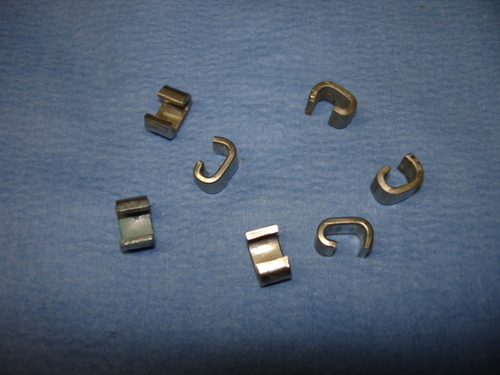 Since I reproduced the band clamp ring years ago C-clips have become so plentiful that I could easily sell them by the pound and unless someone is doing a period correct restoration I won’t even put them back on a regulator…..

At the same time I was lucky enough to run across a specialty sealing and gasket company up north that was fine with making small quantities but I had to pay for the dies to cut the gaskets.  The most challenging was the high pressure diaphragm as it took them a while to source the correct material for it. They did several samples from material they had on hand but none were quite right and one sample was way below the strength needed for the job and it blew apart while I was testing it..
Springs were another story altogether as nothing off the shelf or in a catalog is quite the same as the DA’s main or second stage spring that I could find.
I entered an agreement with a spring company in CA to make both springs and about 3 or 4 weeks later a whole lot of springs showed up and I was ready to go!  I put the new springs in the same DA I had been trying everything else on and the IP held fine but the 2nd stage free flowed…….So I took another new spring out and tried that…..still free flowing.  I figured I had worn out the seat and put in another of the new batch I had made up. No matter what combination of new springs and seats I used the regulator still free flowed. So I finally swapped out one of the new springs for the ORIGINAL…..And there was no more free flow…...Hmmmmmm So I got out the micrometer and started measuring and even though to the naked eye the 2nd stage spring appeared to be exactly the same, the wire size was actually smaller in diameter or gauge than the original…..
After raising hell with the spring company they finally admitted that my job was so small that they subcontracted it out to their job shop overseas and my springs were most likely made in metric wire gauge as opposed to US wire gauge !!!!!  This was not the last time projects would go in the metal recycling bin at my house.

By this time I had put together a basic service kit for a DA Aqua-Master that had all new rubber parts and correct phenolic gaskets. I had also acquired a couple more DA’s and a Navy approved and had been testing them in my garage for weeks.
I approached Dan at Vintage Scuba Supply about carrying them on his website and suggested I could put them together and sell them to him in bulk and we could both make a little coin on the deal and I sent him a few of the sample parts.  Much to my disappointment he told me he didn't think my kits were good enough for his customers.
I was livid as you can imagine and more than a little pissed off! I took some time and carefully looked over my parts comparing them to the originals and the only part I could find flaw with was the 2nd stage LP seats. They were cut from silicone rod stock and when the knife cuts them it squeezes the material and it has a slight angle to it. Nothing that affected the use of them and they seated far better and more reliably than reusing a 50 year old rubber seat.
Around the same time I started getting flack on the Vintage Scuba Supply message forum from a few that consider themselves experts in everything they talk about and some were just dumb ass keyboard divers.
Along with the chicken little crowd I met some great people who helped and supported what I was trying to do and many of them I am still friends with today.  In hindsight I’m glad I was told my first efforts were not good enough as it only cemented my resolve to do what I had set my mind to doing to begin with.
Before anyone gets any wild ideas that Dan and I are mortal enemies, nothing could be further from the truth. We have worked together many time in the past and have always remained amicable toward each other. I respect Dan for his efforts in getting the word out in the early days and for documenting much of the early history of double hose regulators that we all enjoy diving with today.

Join the fun on the Vintage Double Hose Message Forum to comment and learn more.