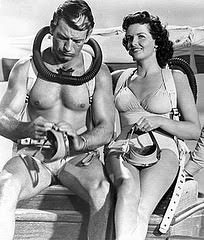 Areas highlighted in BLUE are links..Please click on them


Please read carefully…..Over the years VDH associates have been guiding divers in this area and by following this outline it will save you a lot of grief and speed up your evolution into Mike Nelson.


First things first…..DO NOT GO OUT AND BUY A BUNCH OF OLD GEAR! Biggest mistake you can make.  There is nothing on the internet or an auction site that you would actually dive with that cannot be found year round and in several places.
Ok, now that you have put your wallet away you need to set down and think long and hard about yourself as a diver. Ignore your ego and look deep.
When was the last time you went diving?  Has it been years or weeks? If it has been a very long time I would suggest taking a refresher course or at the very least taking the gear you have and doing some pool work and some re-reading of SCUBA BASICS.  If you are not proficient and comfortable with the gear you originally learned to dive with, then Vintage Equipment will not solve that!
More than once I have witnessed a diver, new to the group, joining us for an event decked out head to toe with amazing vintage gear. But from the moment they start assembling and putting on this equipment, they are struggling. Once they get in the water they struggle even more and after a brief uncomfortable and non-enjoyable dive they end up thinking...What the hell did I get myself into this for?... It’s because they did not take the time to insure that their basic diving skills were up to par.

.If you can’t be honest with yourself at this point and do what is necessary to get yourself to Basic Competent and Safe Diver level, don’t go diving! (Take up golf!!) You could harm yourself or worse, another diver.

With that said and moving on…..The skill that many divers going vintage struggle with most is diving without a BCD.  Some were never taught basic weighting skills to begin with.  Take your gear to the pool, and some extra weights as well.
Once you are in the water get all the air out of your BCD….ALL OF IT.. Get comfortable in your gear and relax. You are going to work on obtaining NeutralBuoyancy.
With your lungs full of air you should be able to float on the surface comfortably with your head out of the water.  As you exhale slowly you should notice you start to sink slightly. Not like a rock but your body will start to slowly sink under. You will need to add or remove weight till you get this part right. FORGET YOU HAVE A BCD ON.
Once you have accomplished this at the surface you will find that you will have to swim down the first 10 or 15 feet but then you are close to neutral for the remainder of your dive.

Next obtain Neutral Buoyancy with only your snorkeling gear and wetsuit on. When comfortable practice doing  Kelp / Pike dive or Head-first surface dive.  You may need to use your arms to pull yourself lower until your fins get under but it’s practice that makes it perfect here. You are getting used to descending without being pulled down by excess weight for which you compensate with a BCD.  In the future you will ditch your BCD all together and dive like a Manfish. Neutral buoyancy with your wetsuit and snorkeling gear will be very close to neutral when you put on minimal vintage gear and only minor adjustments to perfect your weight should be needed.

Another good exercise is Ditch and Don...You may ask yourself why in the world would I take off my gear underwater?…...You may never need to do it but it is a great confidence builder and for decades was a requirement for passing all scuba courses. Give it a try; it’s more difficult than you might think especially wearing a wetsuit.
A pool or other shallow confined water spots are good places to task load and challenge your skills. Look at some of the diving manuals of the past and concentrate on the basics, mask removal and clearing, or swimming without a mask. There are dozens of skills you can and should practice that will elevate your comfort and confidence level and get you ready to move on. Spend time getting to the core diver in you. Practice what you are not comfortable with until you are. Doing this will make your transition into the Vintage Equipment Diver world much easier, more comfortable, and safer.

New ideas for the blog

Right off the bat lets establish what’s what about this blog…..

One of the things that many of us run into when we dive vintage equipment is a rather simple sounding question:

What is the appeal?

On the VDH forum this very question invokes passionate responses. I would like to humbly provide my personal reasons for why I enjoy diving vintage equipment, and for what specifically got me into diving old scuba gear.

For me, diving vintage scuba gear started out with a simple idea. I wanted to learn how to service a scuba regulator. It couldn't be that hard, right? As it turns out, it really isn't if you have some mechanical aptitude and some basic academic knowledge. I began servicing my Aqualung Conshelf XIV regulator set, which was fun, simple, and a great confidence builder. No longer was I beholden to the dive shop for getting my regulator set serviced. One day, while I was looking around on Ebay for another used Conshelf regulator, I stumbled across the Aqualung Conshelf VI. This was the first regulator of the Conshelf line, manufactured and released by Aqualung in 1965. I simply couldn't believe that it was only 30 dollars for a complete first and second stage. It seemed like a real piece of history. Heck, it pre-dated the personal computer. I purchased it, bound and determined to see what made old regulators tick on the inside.

Remarkably, a Conshelf VI from 1965 is almost identical to a Conshelf XIV from 2010 on the inside. You can literally use the same parts kit for a modern regulator to rebuild the first stage of a conshelf made in 1965. For me, the voodoo was gone. After purchasing a copy of Regulator Savvy, and learning a little bit more about what made most regulators tick, I realized that regulators in general are not particularly difficult to service with the right tools and a little patience. It made me wonder if I could realize value in other components of my diving. I had a mint condition regulator, freshly serviced, and I had invested maybe 50 dollars total. Could I extend this to other areas of my diving? At the time, I was in graduate school and money was a real issue. I wanted to dive, but I wanted enough ramen to last until payday as well. I realized that since older dive gear is junk to some people, that I could acquire it rather cheap...and sometimes for free.

This lead me into examining the scuba gear of the 1960's in its totality. This also lead me to the important realization that while masks, fins, booties, wet suits, knives, and other gear looked similar to what I had seen in dive shops that people did not wear buoyancy compensators in the old days. How was that even possible? My instructor said that a BCD was "life support equipment." If that was the case, then how was everyone, children included, diving without one for the first 30 years of the history of sport diving?

This lead me to assemble a complete representative set of 1960's dive gear, and to resolve to learn how to use it. To make a long story slightly shorter, after a bunch of reading, some mentoring, and a little practice, I too was flying through the water like Jacques Cousteau did on TV. I realized that, for me, diving is a heck of a lot more fun when you do it with less gear. My wife, minimalist that she is, also really loved diving with less gear as well. We began to dive vintage equipment whenever we could, because it was really fun. It has that sense of adventure to it that is lost in an era where people will carry your equipment up a mountain for you, and four dollar coffee is on every corner.

-It is a way to save money
-It is a piece of diving history
-It looks really cool
-You can learn to maintain your own gear
-It is really fun, and feels like an adventure

The Latest from the Argonaut Kraken Dev Team

As Vintage Double Hose continues to grow, we plan on using our Argonaut Kraken blog as a sounding board for new ideas, new modifications, and new ways to advance the sport of vintage equipment diving. Please continue to follow our blog, which is now linked to our new VDH Google+ business account, to keep up with the newest ideas in vintage equipment diving as we wargame them around the shop.
Posted by Unknown at 8:31 PM No comments: