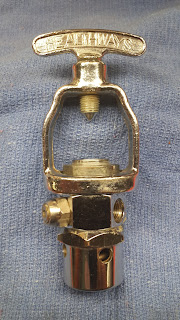 A good place to start discussing Healthways single hose regulators is with the one they made the longest and that you will undoubtedly see the most often. And in my opinion on of the best and most versatile they ever  made.
The ties between Healthways and Scubapro is discussed in dozens of places so I won't bother going into the details here but you will quickly recognize similarities.
This blog post is not intended to be a historical account nor a service and repair guide. Links to supporting documents and catalogs are at the end of the blog post.
The Scuba Star First Stage appears in the 1961 Healthways catalog with a Second Stage of the same name. (I'll cover the second stages later) at a price of $32.50.
It is a very simple piston first stage with a few unique features. 1961 Scuba Star Schematic Healthways changed the first stage slightly in 1967. 1967 and later Scuba Star Schematic
The 1961 version contained what was described on Pages 9 and 10 of the Healthways Service manual
as a Depth Compensated Automatic Air Reserve. Which basically amounts to a restricted orifice to be used in conjunction with a K valve or if you are using a J valve the hole in the restricted orifice was larger. Details are in the service manual and part numbers for both are listed on the schematic.
I'm not sure of the differences in size of the orifice nor do I have an accurate way to measure them if I did have both available. In reading the Healthways catalogs and service information it seems the company was obsessed with reserve type indicators of various types. 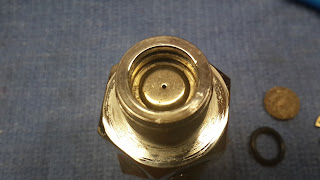 The orifice, O-ring and filter were retained by a C-clip in the early version of the first stage. 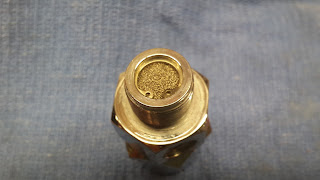 Moving on to the ports on the first stage there is one for the second stage and by looking into it you can see passage directly into the piston area. 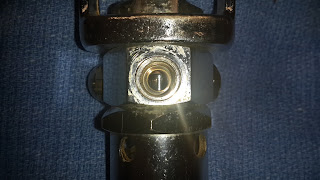 There was also a high pressure port for using a pressure gauge but it was not stamped HP on the early version so be sure if you are using one that you look carefully before attaching hoses to the ports. Below is the HP port which you can see passage leading to the high pressure side of the first stage. 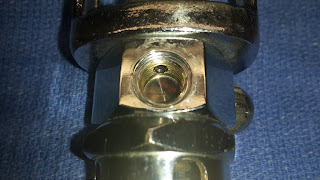 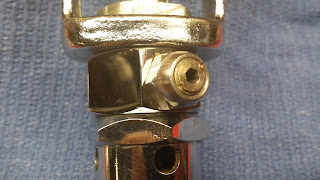 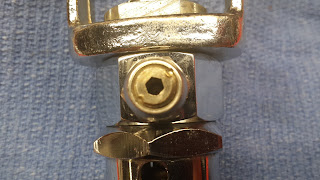 Healthways refers to this valve as a "third stage" in several references in their catalogs and service manuals.
This overpressure device was a very necessary safety feature as many of the second stages used in conjunction  with this first stage were Upstream Tilt valves. (I'll cover later)
One of the shortcomings of the Upstream Tilt valve second stages is that when and if the first stage fails to seat at a normal intermediate pressure there is no way for the high pressure air to get past the second stage and rupturing the low pressure hose will occur.
The overpressure valves are set to open at a designated pressure and the adjustment screw is staked on two sides to prevent further adjustment.
In later years Healthways used Downstream valve second stages and this overpressure device was eliminated. You can remove this device and use the port for a safe second stage or inflator hose if you are absolutely sure you are using a DOWNSTREAM second stage. Otherwise keep it in place! 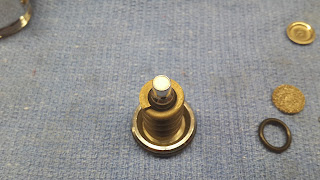 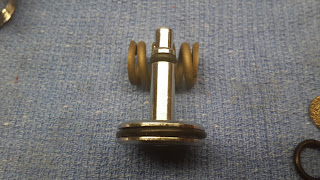 The internals are simple and robust and did not change though the years. Basic piston first stage with a high pressure seat and two O-rings. Intermediate pressure was adjusted by adding stainless steel shim washers at the piston base or base of the first stage held in place by the main spring.
Healthways recommends an intermediate pressure of  135psi +/- 5 at 2000 psi.

In 1967 the Scuba Star first stage was updated slightly according to the schematic and catalogs.
The C-clip retainer was replaced by a star retainer, and the overpressure valve and the Depth Compensated Automatic Air Reserve orifice are not shown on the service schematic but are still listed as available part numbers.

Note: In 1963 Scubapro introduced the MK3 which has more than a few things in common with the Scuba Star. The piston is different but only SLIGHTLY and everything else is mostly cosmetic. Knowing the relationship between the two companies this comes as no surprise but if you tell most divers you are using a MK3 first stage they generally smile and acknowledge you are diving with a great piece of vintage gear....Tell them you are diving with a Scuba Star first stage and most will recoil in horror at the fact that you are diving old dangerous equipment.....It's all in the marketing!

I'm working on first stage service kits for this first stage and should have them in the store soon. Yes I know you can go to the small engine parts bin at your local hardware store and scrounge up some O-rings,possibly flip over the high pressure seat and cut some shim washers from a sheet of tin after you give the metal parts a dip in some magic concoction of cleaner. There is a cheap way to do things and there is the right way to do thing. Rarely do the two ways end up with the same results.

This is a great first stage to learn on and will be a winner to dive with when you are done. They are available inexpensively from a variety of sources.
I dislike UPSTREAM tilt valve second stages by Healthways or any other manufacturer but hook your Scuba Star first stage up with a downstream valve second stage and have a good time.