Sand Dog XII was once again a fun event and a great time meeting new divers and getting together with old friends.


Friday starts out as is usually does as divers arrive and start to assimlate in the motel parking lot. The veterans of the event are pretty easy to spot as they are normally standing or walking around with various regulators and other gear they want to show off or discuss with everyone. This is the time that the new divers to the group start circling closer and closer and most jump right in with introductions and comments like ….I’m (insert screen name here) on the VDH Website Forum….OH so your the guy or, It’s finally good to put a face with the posts…..Hey tell me about that new flux capacitor you have been putting on your Deathways 2000 that is supposed to double your bottom time…..Or  Hey did you get your new Argonaut Kraken yet?  And the inevitable….If you are looking for gear, the guy in 207 has some great stuff for sale...Better get on over there before Rob gets here and buys it all up.
This went on and on for hours as people split up and go into little huddles scheming and plotting to get the best deal and make the most of what they brought to trade and sell.
Followed shortly by one or two divers getting in the motel pool and showing off their best Mike Nelson skills as the rest grab a beverage or two and talk diving and catching up from past years events.
Eventually and with as much effort as herding cats we all made it to a local buffet restaurant where more 50 Fathom dive stories continue.


Saturday morning comes early as Blue Springs only allows X amount of divers in at once. If you don’t get there early you may have to wait till the afternoon to get a divers pass.
Luckily we had rehearsed the drill the night before and were able to persevere through the ass backwards system of diver check in at the park and made it to our assembly area all in one piece.
First I would like to thank Dave, Fred and Fun Size Doug for grabbing a great spot and putting up pop up canopies to help shelter us from the heat!
The day progressed as usual with divers going in and out of the spring trying out various equipment configurations, getting used to the heavy flow from the spring and taking lots of photos and video of all the divers.
At lunchtime we gathered for the traditional Sand Dog cookout mastered and overseen by my lovely wife and daughter and everyone was well fed and rehydrated and ready for another fun filled afternoon of double hose diving. 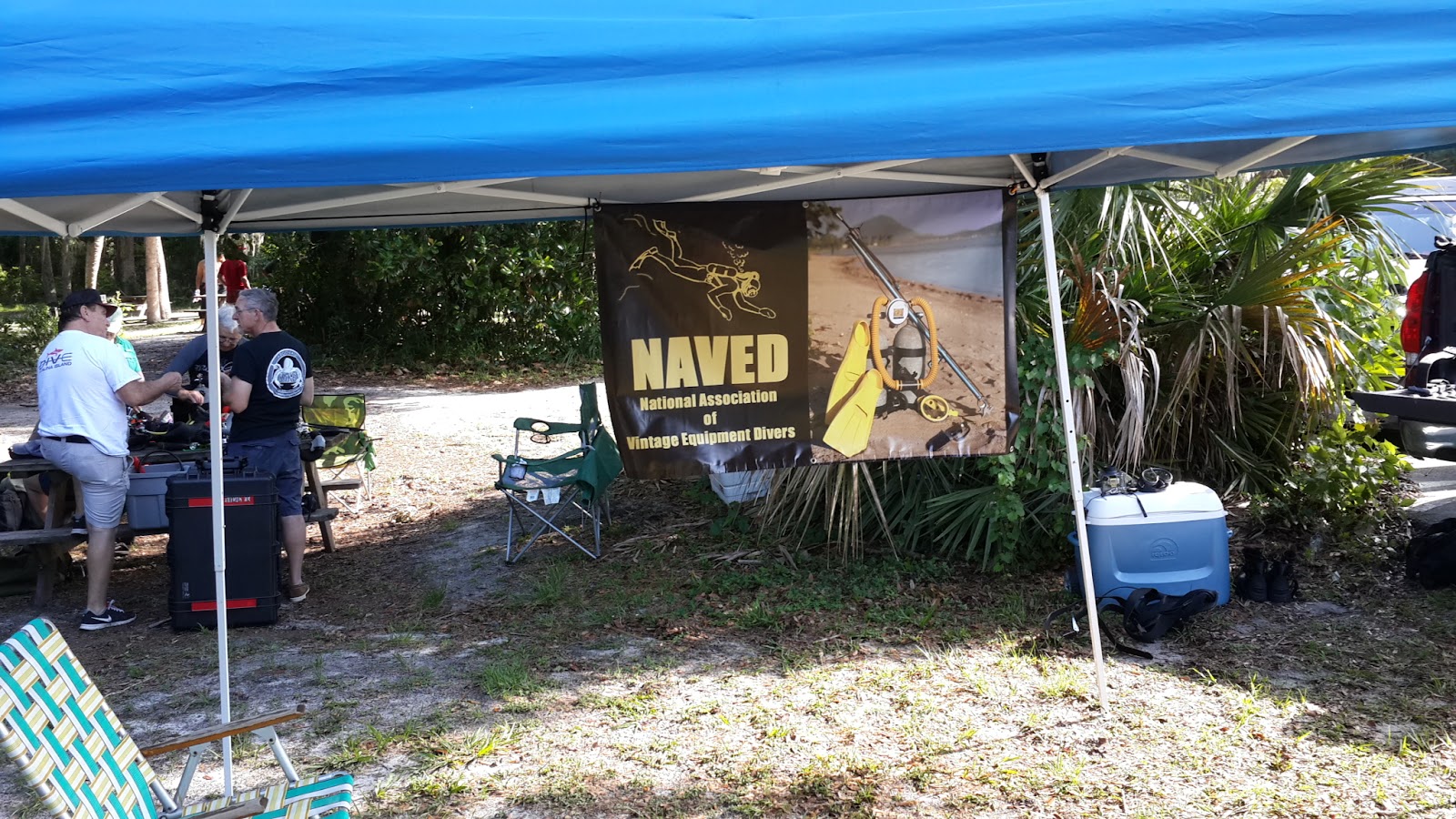 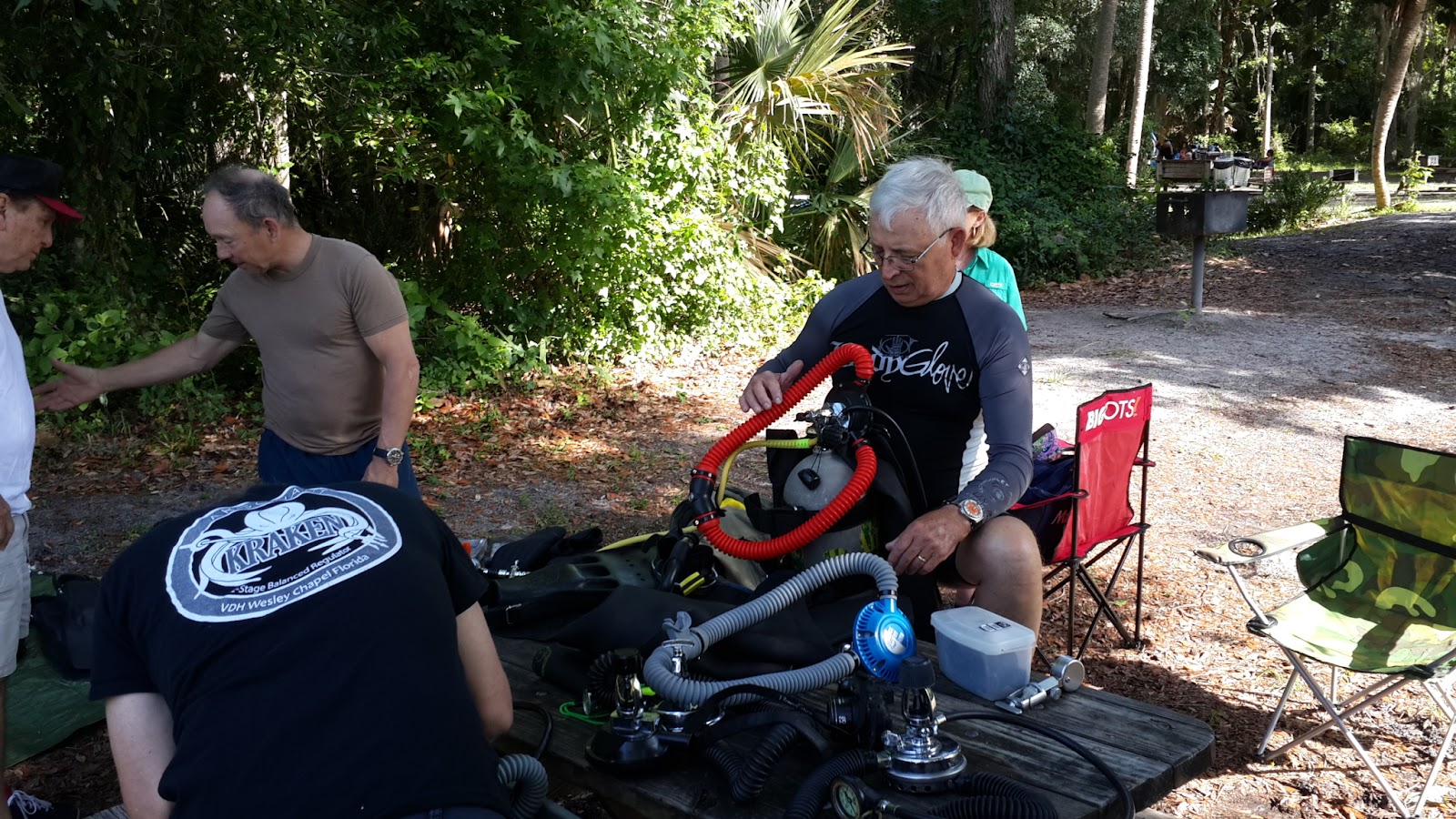 Sunday morning took us to Alexander Springs which is about an hour from our host motel and through the genius of GPS directed several of us down a 6 mile stretch of washboard gravel road that was more akin to an episode of Top Gear UK, (not the crap US version) than a diving trip!
Alexander is a shallow spring but allows for many dives and is a great place to try out new gear and configurations. Gives divers the chance to get their rigs dialed in for the season and ready for other dive trips and destinations.  Lots of free time to talk and share the common bonds that bring divers together and discuss what was working and how it can work better. 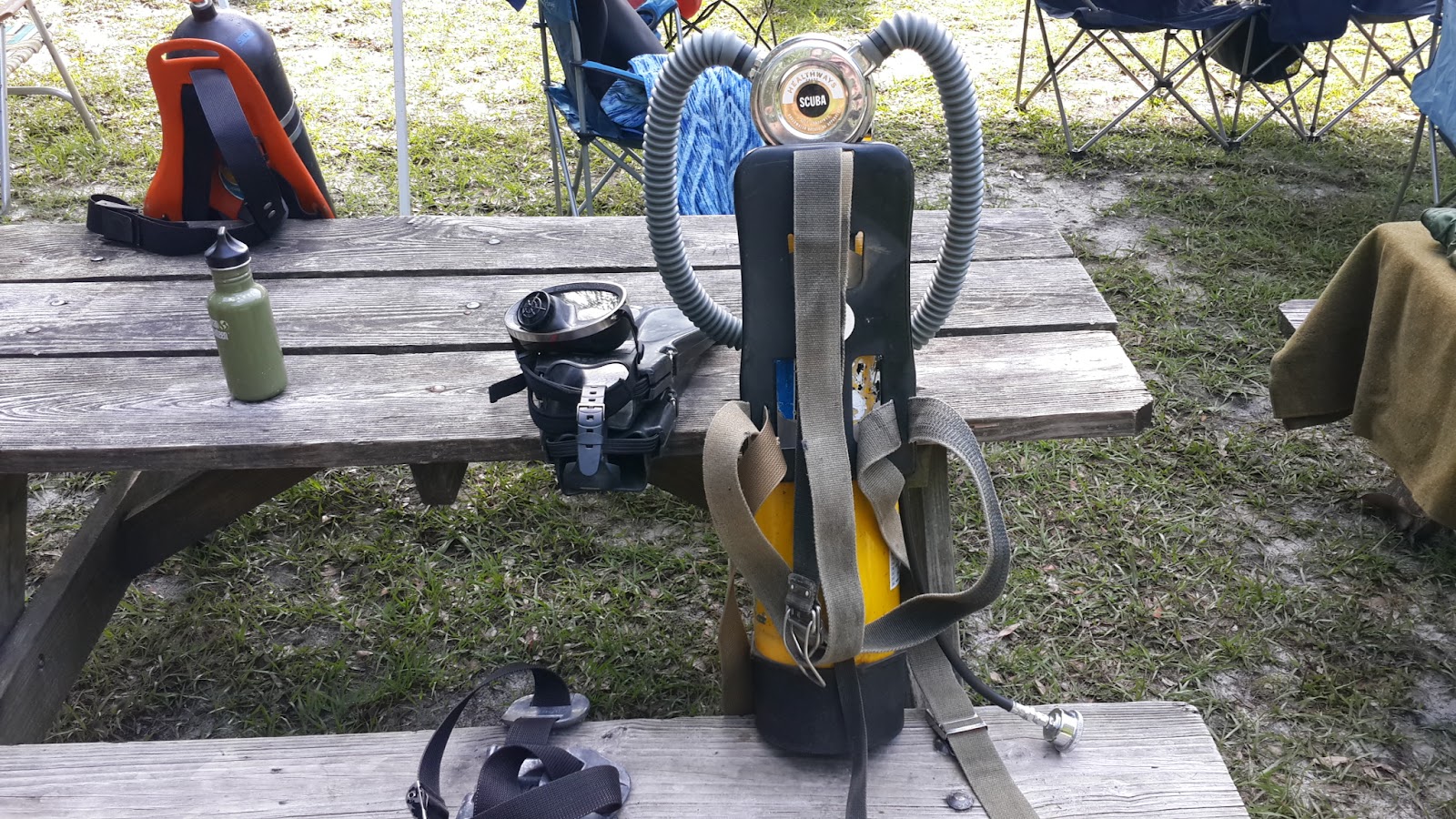 The afternoon was wrapped up the gear was packed and plans for next years event was already in the works.
I’m really lucky to have such great friends and customers gather together sharing their passion for double hose diving with my family and I.  There are a lot more pictures and video forthcoming and I hope you will visit the VDH Website Forum in the next few weeks as divers have time to get home and post them. I had started a post on the event on Scuba Board but The Turkish Turd has made it his mission in life to criticize and demean our group and the event. Envy rears it’s ugly head in every group but no need to be dragged down with it.
I hope everyone makes plans to attend our event next time! Keep watching the VDH website and VDH Facebook page for updates and information. 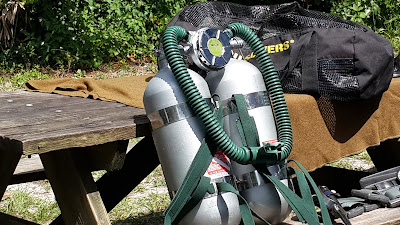 Posted by Unknown at 7:02 AM No comments:

What you see spread before you in the pictures below are parts that 10 years ago were not available new and most not available at all.  If you could find NOS parts they were usually sky high and the NEW part of NOS was often questionable.
For example, NOS main diaphragms were sky high and even if they were kept in pristine conditions they were still no better than the original materials they were manufactured from.
If you want to see the only new parts that were available a decade ago,pay a visit to Dan at Vintage Scuba Supply’s store and you can see what 2005 had to offer for the double hose diver. This is not a knock on VSS, Dan is a well known collector and historian and takes a different approach to his business than I do.
And there are still are people out there who scream….Leave the old stuff alone! We like our regulators to breathe like crap...That’s how it’s supposed to be, you are ruining the originality of them…..You kids get off my lawn!! 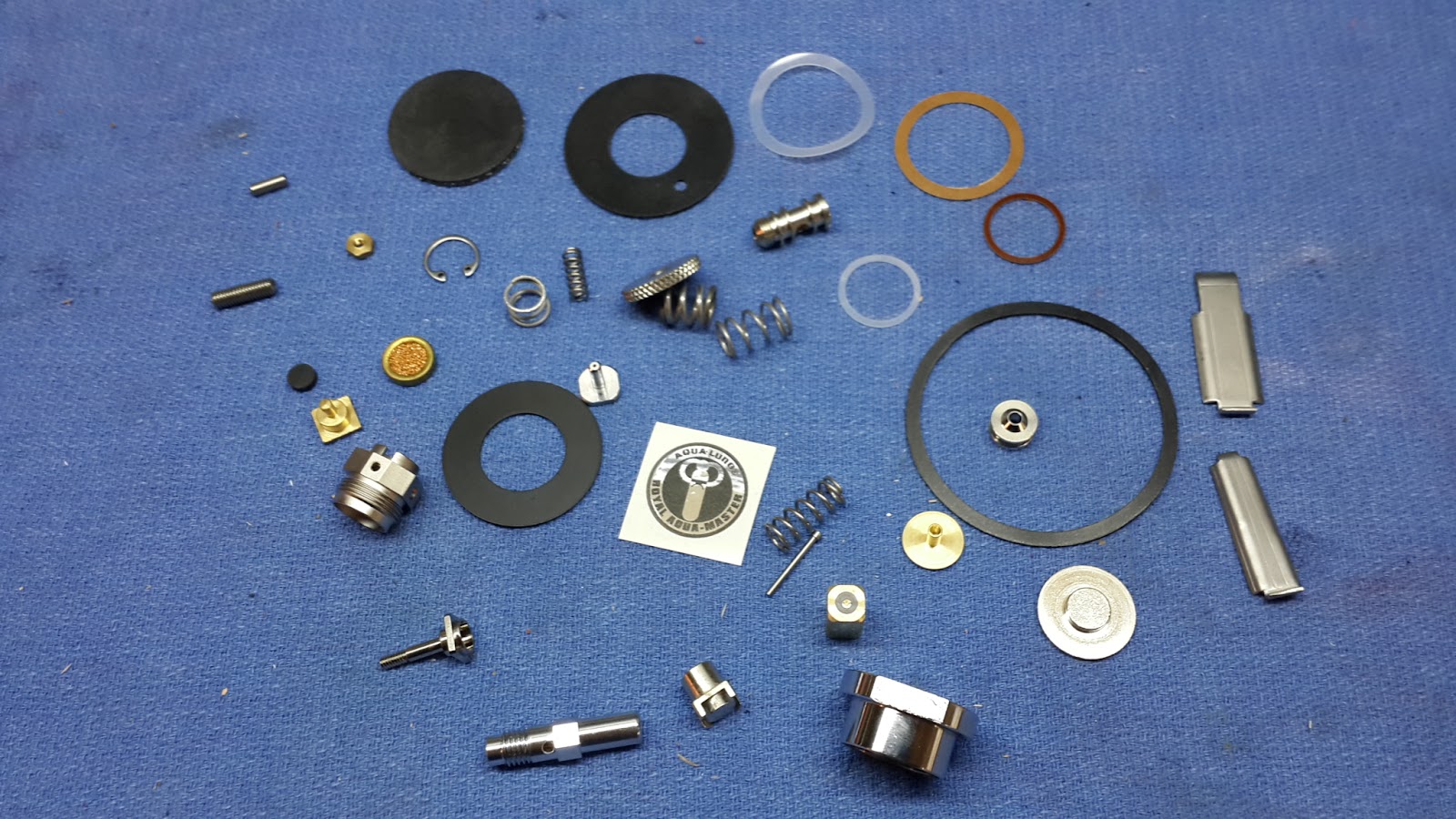 By far the most difficult small part to get right were the high pressure seats. I won’t bore you with how they are actually manufactured but building a rig to test their longevity was a huge undertaking.
I started by putting four identical 72cf cylinder with matching valves side by side and then held them in place on a board with pipe hanger straps. Then I took 4 DA 1st stages with the new seats in them with the pin and mushroom supports all facing up and as perfectly aligned as I could get them. Next I took a dowel rod and put round head nylon bolts through it so they were sticking down like lobes on a camshaft and I aligned each bolt head directly over the mushroom pin support. It took a lot of time to get it all in place properly and finally I attached a small motor to a gear reduction drive that I got from a device used to pull up theater curtains very slowly.
Finally I connected it to the dowel rod with a Lovejoy connector and let it rip...The dowel rod turned and the nylon nuts pressed down on the pin supports unseating the high pressure seats cycling the first stages. I did this for days….If I was home, the rig was running. Periodically I had to adjust the length of the nuts so they would keep an even pressure on all 4 valves or some would actuate and some would not. Did I mention this went on for days?  Well it did!
The sounds were similar to steam valves opening and closing and after a while I had to put on hearing protection cause it was driving me insane…….But in the end it worked pretty well and I’ve been really happy with all three HP seats I've reproduced and the Quick Set tool I now use would have tested the seats durability much easier than the Rube Goldberg contraption I built. 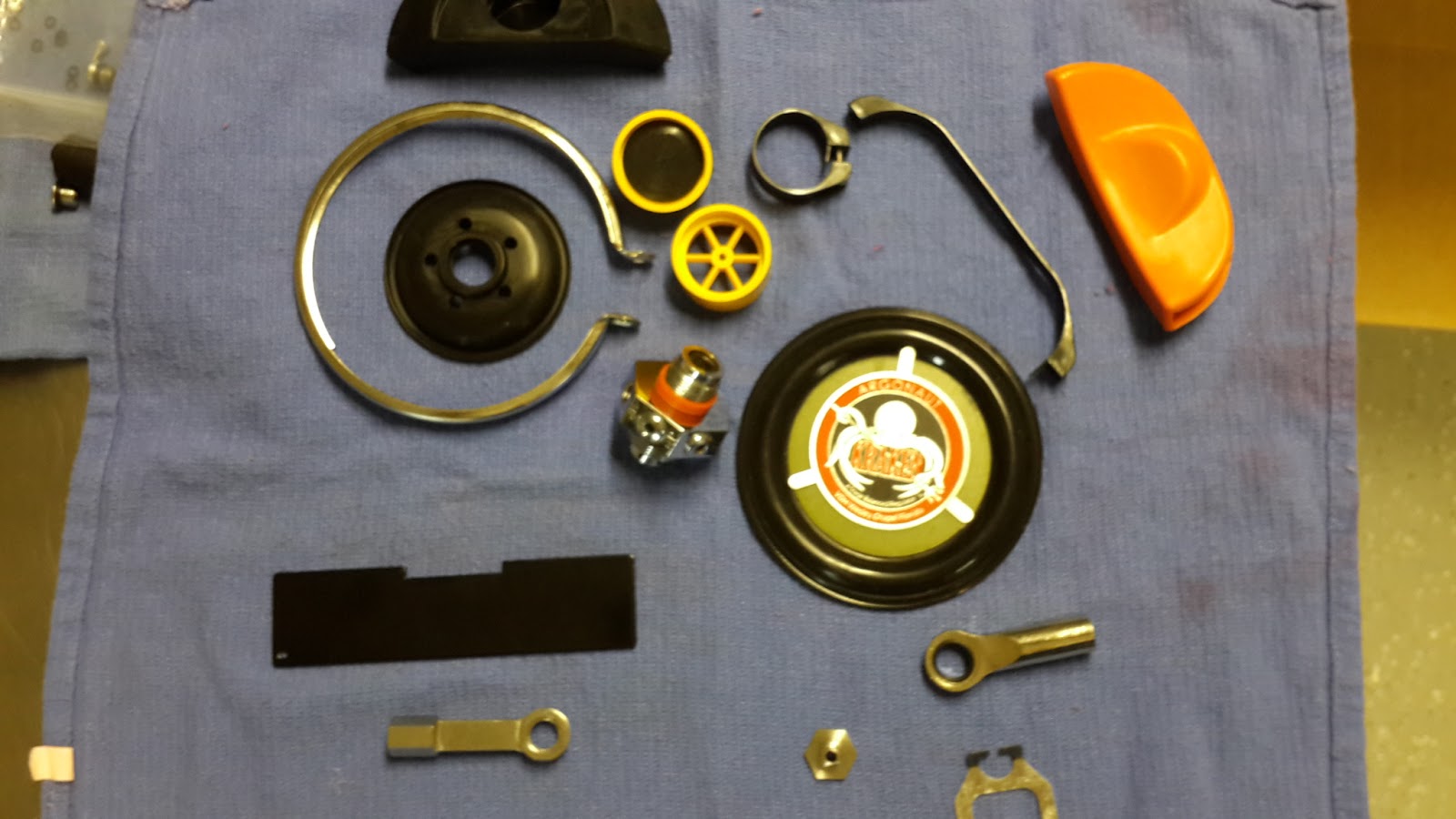 Another challenge was and still is sometimes are tolerances. Parts for original regulator varied a bit. Sometimes a little, sometimes a lot.  I ran into this the first time when I had the brass and bronze first stage filters done.  When I tried the new filters in first stages they fit fine in some and in others not so much. I realized the tolerance when manufactured was on the high side of the samples I used and I should have backed off a bit on the +/-.  Quite a few customers had to sand down the outer edge to get them to fit properly.  They were also very expensive to make so after I ran out I decided that it was one part that I could skip. Modern filters and backup washers work just fine and unless you are at a concours regulator show no one is the wiser.
Another addition to the recycling bin were the first run of HPR 2nd stage levers. The bend angle is critical and the drawings were very clear and explicit but the angle was still slightly off on the majority of finished levers. Now the easy approach would have been to simply flatten and correctly bend them again myself. But after trying a few this way it left marks where I had flattened them and I couldn’t stand the thought of a part that looked so nice and shiny with marks on it….So I scrapped the whole batch and today I still bend each lever one at a time in the jig Herman made for me.


A big issue is fielding E-mails like this…...Could you make XYZ part?  If you did make it I would buy one...The operative word here is ONE. Unfortunately I don’t have the skills, tools or machinery to turn out one of any part and no manufacturing company is going to take an order for ONE part unless it’s accompanied by a check with a lot of zeros in it.
There are several other companies that produced double hose regulators aside from USD and Voit but as of now no one has really picked up the ball and offered a large selection of parts and support for them.
Take the Healthways regulators as an example….Made in the thousands and easy to come by. Rugged single stage design and can be a good breathing regulator with minimal effort. The achilles heel is the exhaust design. The majority of them were made with a weird two piece exhaust in an effort to keep the Aqua Lung lawyers at bay over the duckbill exhaust design.
Over the years I have come up with several ideas that would work and even had reproducing the original parts sourced for them but no matter how sharp my pencil was I could never get the dollars and cents to line up with the cost of making them.


Sand Dog is next weekend May 15th to 17th so I’ll blog about that for a week or so afterwards and try to finish up the saga of getting the hoses and mouthpieces made. It reads more like a comedy of errors that a success story….
Posted by Unknown at 6:33 AM No comments: