Once again I’m not a writer or professional trip reviewer.  I call it like I see it plain and simple.  Those who have been may agree or disagree with me and that’s fine. Those who have not been yet may find some of this helpful in their travel planning.
I have been on more dive trips than I can remember both in and out of the country but the last time I was in Bonaire was 87 so it was like starting with a blank slate there again. 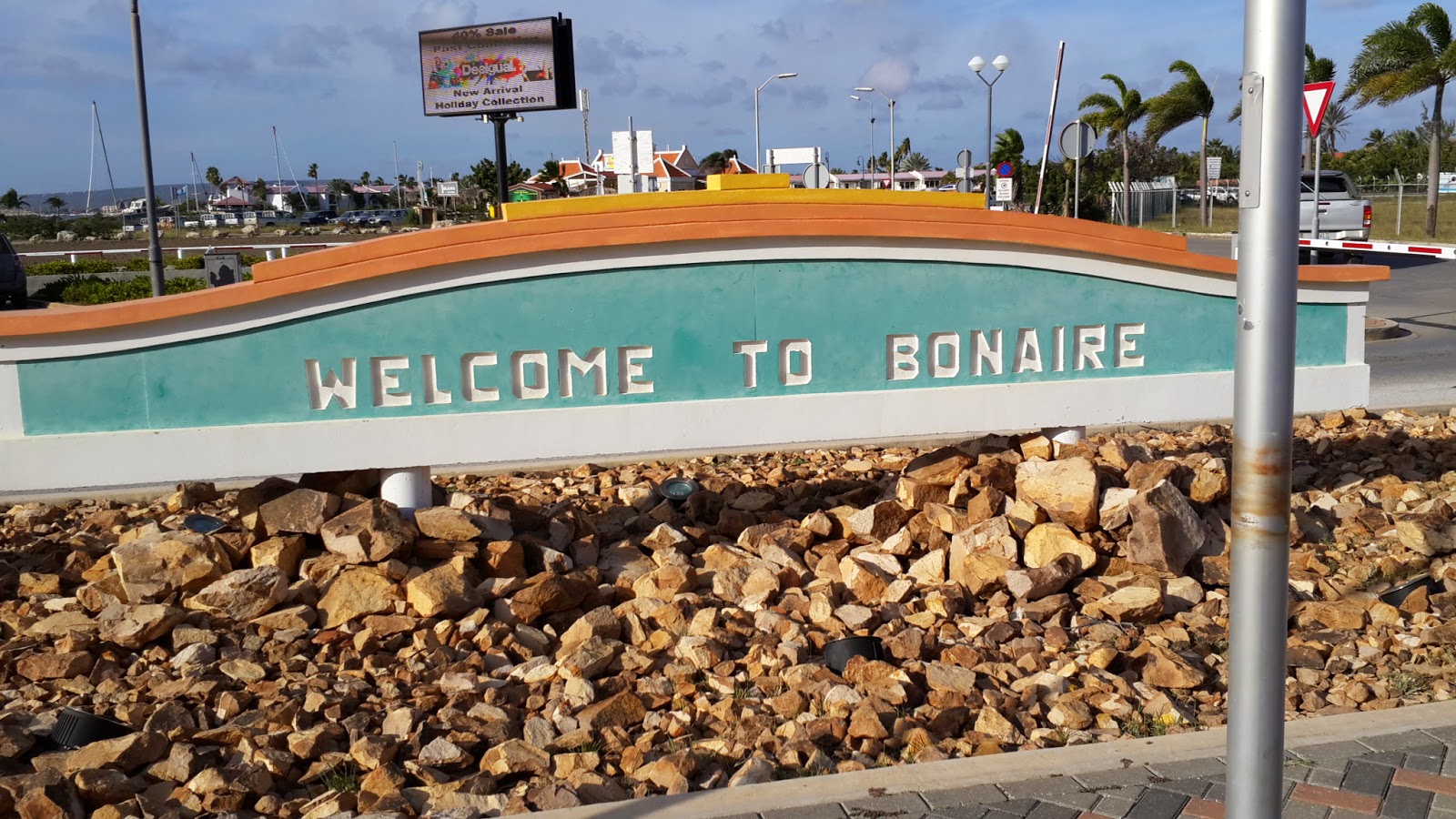 The 4 of us flew from Tampa to Atlanta to Bonaire.  Flights were uneventful and running on time so nothing of note to report there.  Getting off the plane in Bonaire is via ramp as they have no terminals with skyways.  Customs is right at the front door with one line for residents and one line for all others. Customs is more of a formality than a necessity as all they do is say Hi, welcome to Bonaire and stamp your passport.  If you were in the back of the plane and get in the back of the line for customs it may be a challenge to find a luggage cart that is necessary since you have to walk a little ways across the lot to pick up your rental truck. No one will volunteer to tell you that you can go get your truck and drive back up to the terminal for free but it is possible...If you are getting a shuttle or taxi you just walk out to the curb.
Despite E-mailing copies of our drivers licenses and filling out the paperwork in triplicate ahead of time for Avis as we were advised to by the person at our hotel to do they still had no idea who we were and knew nothing about the paperwork we sent ahead to them which was supposed to expedite the rental process….So we had to start again at.. Hello, I want to rent a truck…..
We took a few wrong turns getting to our hotel as it seems road signs are both unnecessary to replace when damaged or missing or to actually coordinate them with the map you don’t get at the Avis counter. I also found it strange that most signs are only marked on one side so unless you are going that direction you have to look in the mirror or have someone read it to you after you pass it.
We stayed at Den Leman Condominiums  we chose the Blue Marlin Room which is the only Two Bedroom Seaside deluxe room in the complex. More expensive yes but the awesome factor was well worth it.

The room has a patio with 4 roll up doors and about 10 steps from its own beach and about 50 steps from the dive dock.(room is lower far right in the picture above)  The only improvement they could make to it would be screens to keep out the mosquitoes which were extremely bad dusk and dawn while we were there. The full kitchen allowed us to cook meals (more of why we did that later) full sized refrigerator was great for ice and keeping it stocked with lots of water and snacks. 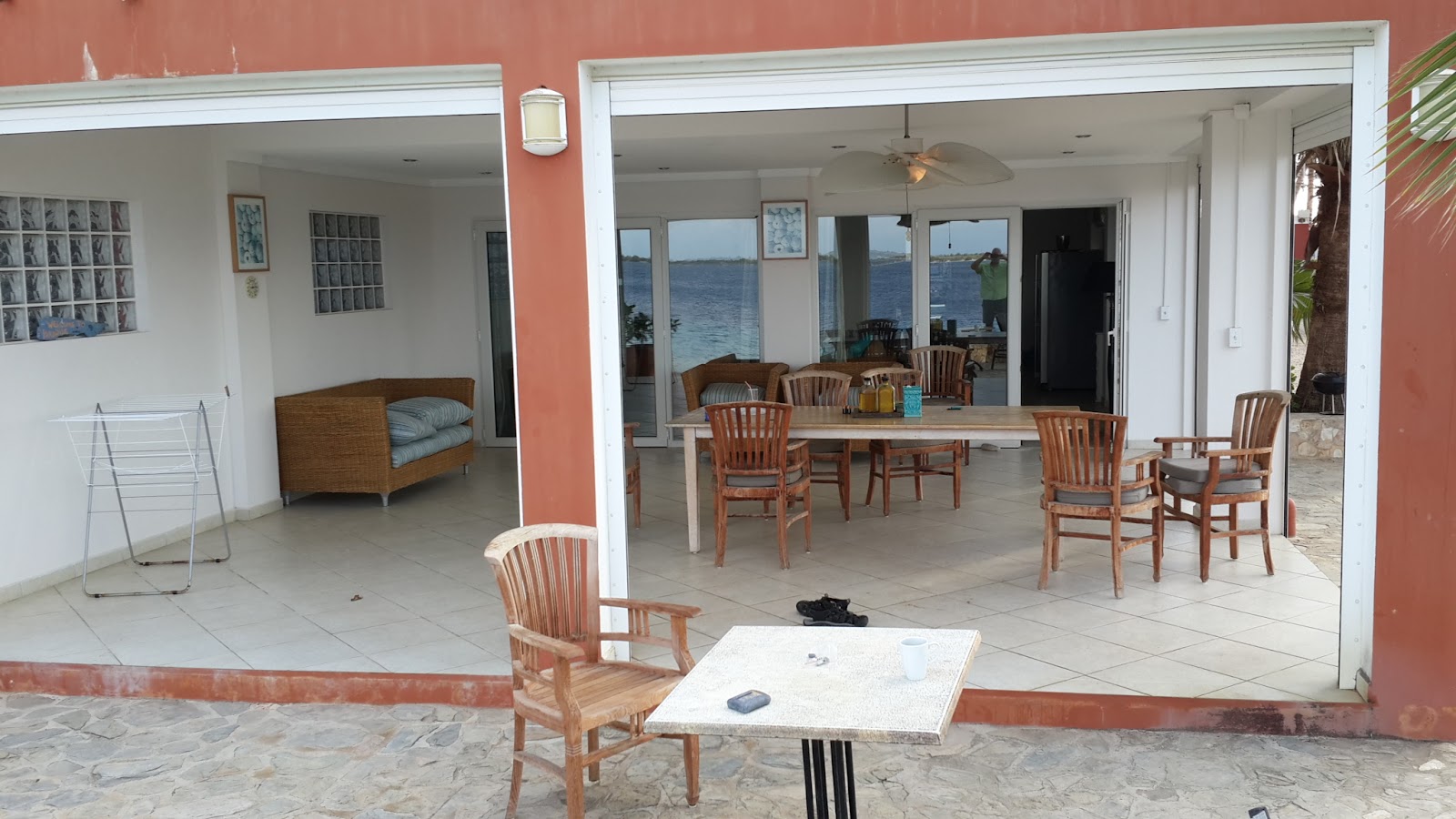 Couple of minor problems while we were there but they were handled right away by the ladies in the office. Everyone at Den Leman was very pleasant and helpful. As long as I could have this room I would stay here again for sure.
Adjacent to our room between us and the dive dock is the  Plazita Limena restaurant which specializes in Peruvian cuisine although from 1st glance I would have figured they had wood fired pizza but not so much. 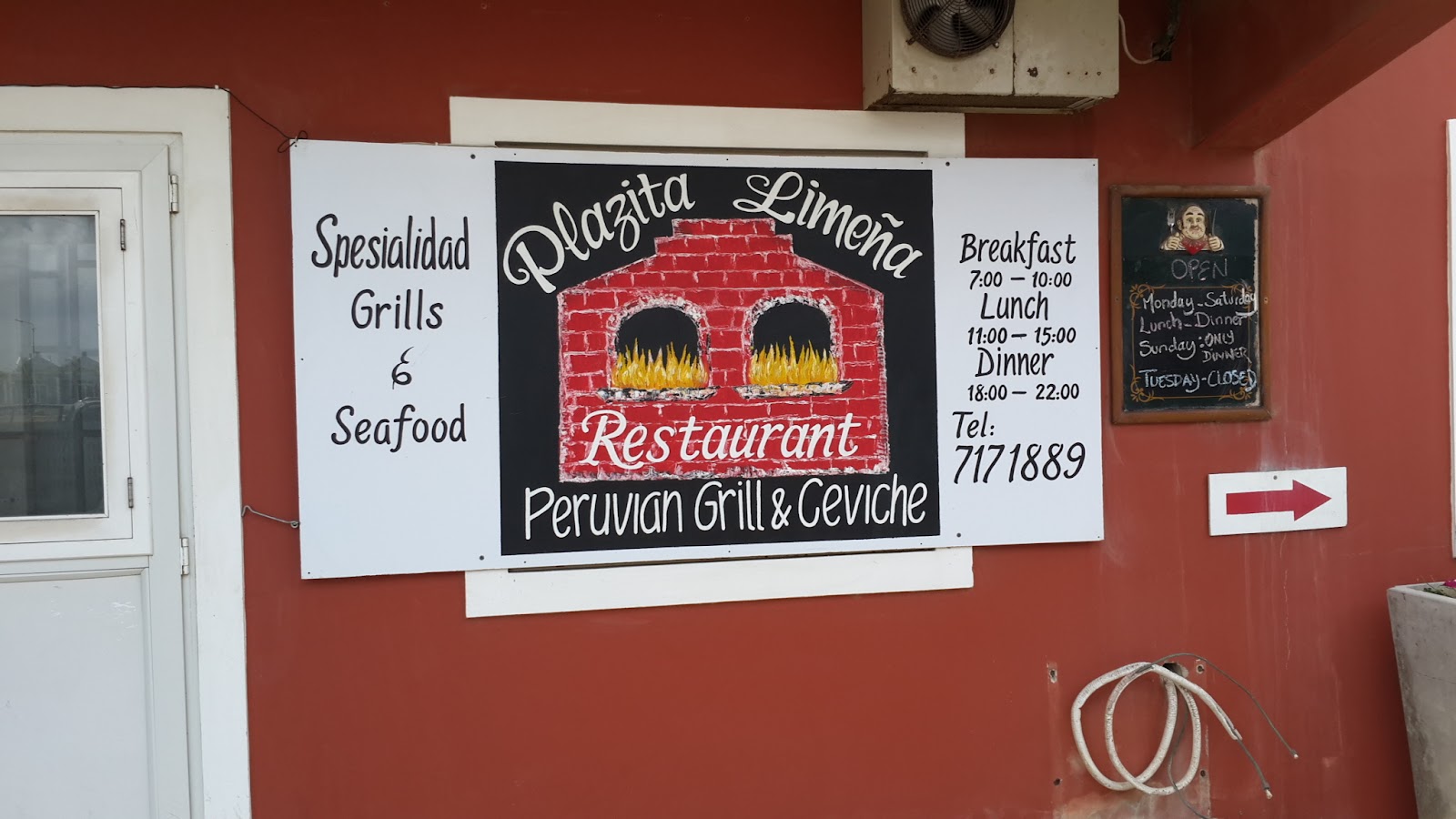 We ate here our 1st night since it was right next door and three of the four of us like to try new things especially food.
The service was good and the people were all pleasant.  A few language stumbles but between Spanish,English and some pointing we got most everything we needed.  Overall we thought the food was Ok but not remarkable at all for the price.  As hard as I tried in both languages I could not get the point across that I wanted my entree SPICY and I’m used to ordering spicy food in many languages but here it was to no avail. I even asked for hot sauce in a bottle which is a foreign concept in all restaurants in Bonaire as I found out as the week progressed. No matter how I asked for it, it was if I was asking for moon rocks or an autographed picture of Burt Reynolds to be placed in the chair beside me...    Also the fact that we would like to have a pitcher of ice water on the table was a tough concept.  When you are trying to hydrate in a desert climate 8 ounce glasses don’t go very far and it would have saved them a lot of trips to the table.
As they were our next door neighbor the girls went back and forth buying colorful cocktails in tall glasses with fruit and umbrellas. Nice folks and I’d recommend you stop in and see them.


Next part of the adventure on our 1st day was to locate a supermarket.  We drove around the roundabouts more than a few times and ended up looking like the UK scene from European Family Vacation.  Finally we found  Van der Tweel Supermarket  which is supposed to be the largest one on the island.  Shopping in grocery stores in foreign countries is always an adventure and I really enjoy looking around at the different items people from other countries eat. This store proved to be a cornucopia of new products and I could have spent hours walking up and down the aisles trying to figure out what things were since most of the packaging was labeled in Dutch.
After putting a quarter in a slot on the shopping cart handle it released it’s locking device from the one in front of it and we were off… US currency is used on the island so prices were easy to read but hard to believe on most items.  We had to stock up on some sundry items and snacks for the week but really didn’t want to take out a loan to buy them!  I was able to procure some unique cup o noodles which were awesome because they contained a collapsable fork inside so they were completely portable and borderline tactical. Everyone was really happy with the selection of chocolates as well. Be prepared for sticker shock when you visit. I’m sure most of the locals don’t shop here and on our next visit I’ll be shopping where they do.

That about wraps up day one…….Tomorrow it’s on to the diving we hope.
Posted by Unknown at 11:44 AM