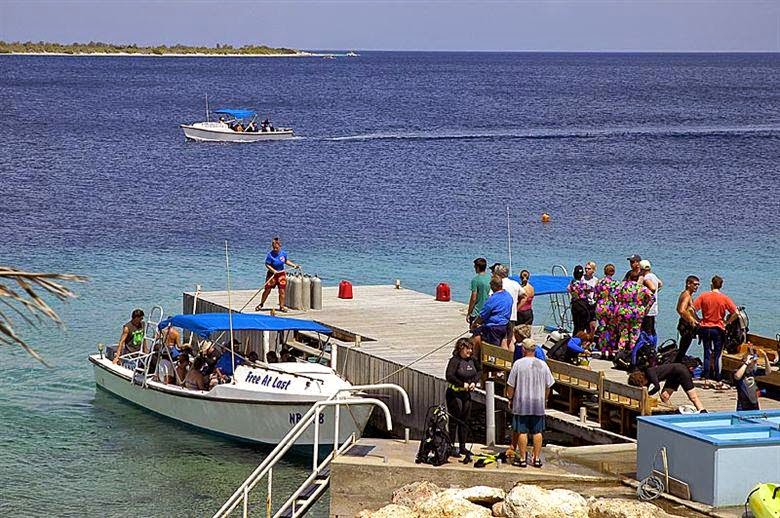 Bonaire Dive and Adventure has two boats but we only used the larger of the two named Free at Last. They leave several times throughout the day and you make your selection for dives the day before by putting your name and requested site on chalkboards outside of the equipment storage area. First boat leaves at 9am and getting on and off could not be easier. If you want air you don't need to do anything just put your gear on the benches by the boat. If you want NITROX you grab a cylinder from the storage area on the dock,check the pressure and mix, write the info on the clipboard and put your diver number and pertinent info on a piece of valve tape on your cylinder. The boat is small and can only take 12 divers max. There is only room for one cylinder per diver per trip but since most dive sites are 20 to 30 min away it's not a big deal. The crew loads the cylinders for you and everyone takes their seat and you are off. Even with 12 divers on the boat it was not too crowded and there was plenty of room to move around. There is even an enclosed forward area to keep stuff dry and cameras safe on the trip in and out.  The entire time we were there the seas were calm and waves were virtually non existent.  Diving around here is more like a giant inland lake or the largest aquarium in the world.

Let me get this out of my system now so I don't have to repeat it........As we were circling around Kline Bonaire to get to the dive site I was horrified by the HUGE amount of garbage all over the shoreline of this otherwise beautiful little island.....I have seen landfills with less trash in them. I tried asking about it but was met with no real answers and the feeling that it was a subject that no one wanted to discuss.....Ok rant about that is over.

Our crew for the boat this day was John who is a big guy from Curacao and a small and comical man called PeeZee from Germany.  We were given a pre dive briefing and told about the entry and exits and normal other stuff to do if problems arose. I thought John did a good job covering the important points but did not keep us on deck baking in the sun.  They ask that cylinders remain stored at the back of the boat and that you assemble your gear after you arrive at the dive site.
As usual Rob, Barb and I wanted to be 1st off the boat but this time we had Eva with us so it took us a little more time since this was her first boat dive which she took in stride without incident.
John guided the group around the reef which is crazy full of small fish and various soft and hard corals. The sun was shining and all the colors on the reef were amazing. Despite the shore looking like the sides of the New Jersey Turnpike the reef was in fantastic condition with very little evidence of the thousands of divers who visit it every year.
Rules are one hour dive time and we followed the group but when the majority of your dive is spent around 30 feet you have almost half your air left after an hour.....Which is frustrating but we didn't want to break the rules on the 1st dive.
Getting back on the boat is super easy via a very wide and stable ladder on the starboard side of the boat. Once you get back in the boat they prefer to have you stand in place, turn off your air and drop your cylinder out for you and then let you go over to your seat with your gear still on your back. The double hose regulators gave them pause as neither had ever seen anyone using one. I decided to let them help me off with mine and told them to expect to start seeing a lot more Argonaut Kraken double hoses in the future...... Ride back in was brief and uneventful and as most boat crews at resorts are they parked the boat and has it secured to the dock within moments upon arrival.  Only 30 minute break before the boat left again so just enough time to grab a snack and log cylinders again if you were diving NITROX...Otherwise the crew took care of air for you.

Dive # 2 for the day was at 1000 Steps where we had been yesterday from land and it was just as great the second day.  I think this is a site that you could visit every day and see something different. This time our guide was the comical PeeZee who wore fins without straps and when asked how he kept them on his feet he would only say...Its Magic....Dive was one hour in length with lots of marine life and even a curious small turtle swimming around the field of staghorn coral.  Since this coral is in shallow water I was really worried that some of the buoyancy challenged divers in our group would crash into it but luckily they watched carefully and I saw no one get close to the delicate coral. 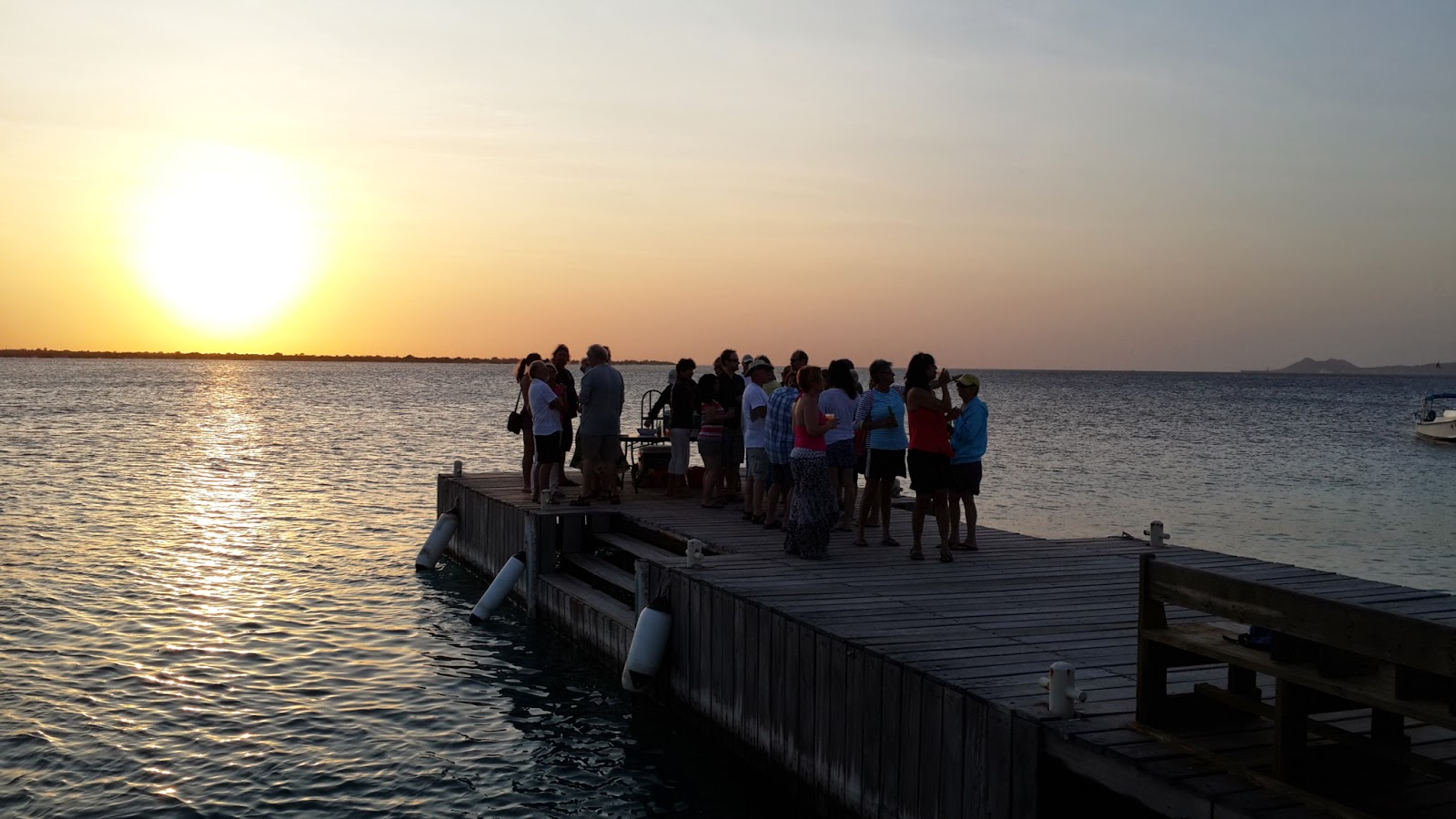 On Monday nights Bonaire Dive and Adventure hosts a Rum Punch party on the dive dock for a couple of hours. It's a casual affair and a chance to meet some of the other divers staying at Den Leman and talk a bit more with the folks from BDA....Andre was a great host who was quick with refills and introductions.

We had heard about the restaurant down the road from us at Captain Don's  The sidewalk area was torn up so we drove down even though it was easily walking distance but Captain Don's had their lot closed and security directed us across the street to park.  We didn't know that the resort was having a big cookout with live music that night but we walked on in like we knew what we were doing.  After getting though a mass of people we were asked if we had reservations.....Ooops....We said no and we could tell they were swamped with guests. Despite that the man we spoke with cleared us a table in the Tiki hut bar area and got us seated right away. The arrangement that night was a buffet style cookout with a large open flame grill and the smells were very enticing especially after diving all day and missing lunch.  Food was great, varied and plentiful including dessert. The folks staffing the various stations were pleasant and smiling the entire time despite the temp around the grill being closed to a thousand degrees......Perhaps it's just me but is there a sign when you arrive at a resort that says Forget Your Manners? Because despite the restaurant being filled with adult guests the majority were acting like 4th graders in the school lunch line......Stuff like that really drives me crazy!!! How hard is it to wait your turn, say excuse me or Please and Thank You....Sorry...Rant over.....Did I mention that poor manners drive me crazy.....WELL THEY DO.
Our server kept up with us as best he could despite waiting on dozens of other people and we really enjoyed the restaurant and would go there again.

At some point we had been told of a little ice cream parlor by the Den Laman that we needed to visit and they were right...And if you like ice cream then this little place is not to be missed.
The Tasty Treat 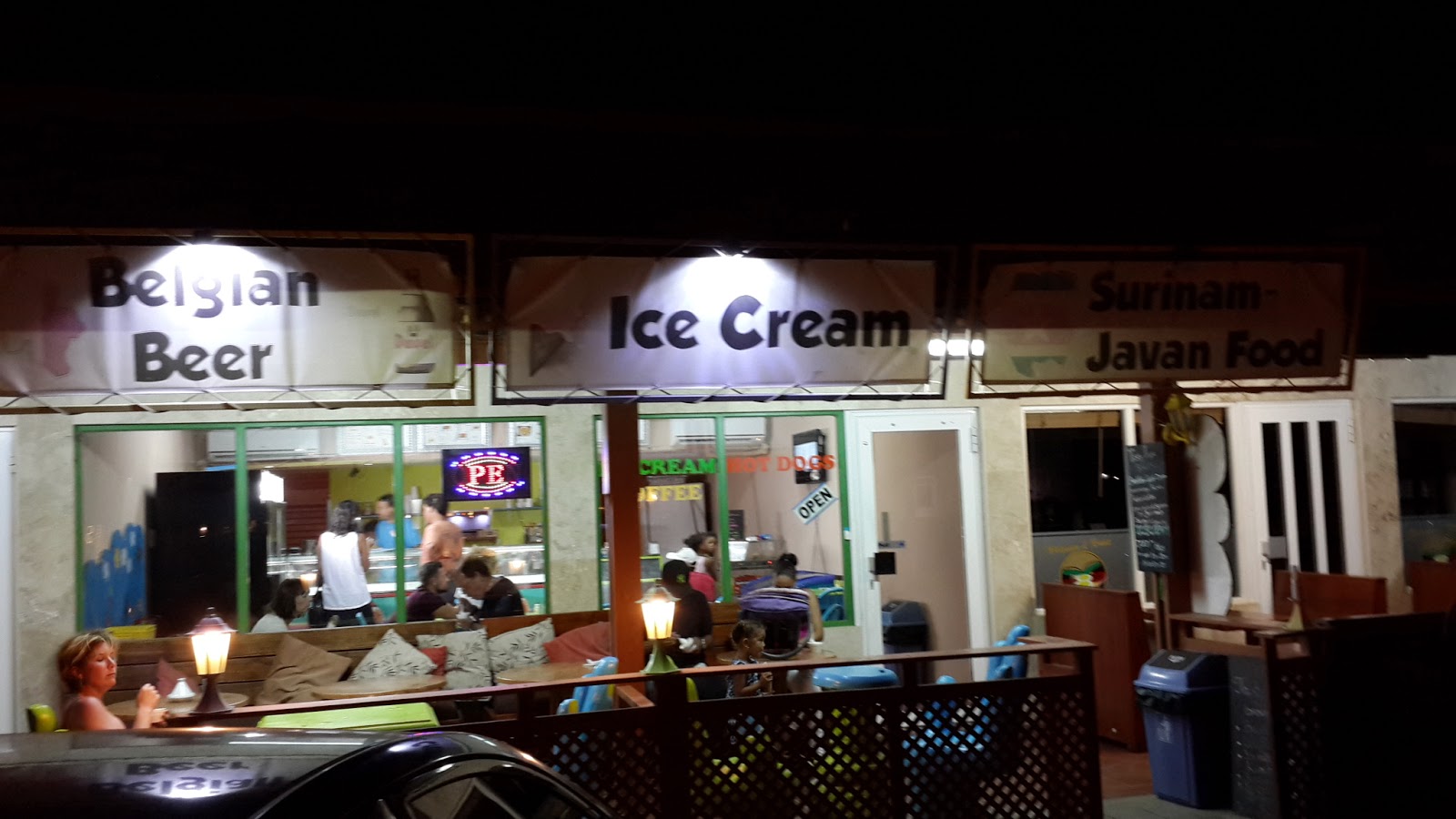 This is an awesome place to stop after supper or for a great breakfast burrito. They have many other things on the menu that I would have loved to try but didn't have the chance.  Folks here were really nice and glad to have us there. They have free WiFi that works really well by island standards and have some unique chairs on their patio.....So just go here.