As with many projects we start this one started to snowball and the momentum it was gaining gave me confidence that I should pursue other items for the double hosers.
I had started rebuilding quite a few regulators but was EXTREMELY frustrated with the final product because so much was lacking in what I could do with the right parts.
Regulators were rebuilt with new parts inside but the ancillary parts were still original. Main diaphragms were 50 years old and the rubber had lost most of it’s flexibility. Mouthpiece valves were about the same or had been replaced with pieces of inner tube screwed into the wagon wheels. Duckbills were available as replacement parts SOMETIMES…..I didn’t and still don't like to be at the mercy of someone else when working on something.  I was turning out regulators that were like V8’s with two plug wires missing.  They worked much better than they did before service but still were way below their potential.
First things I tackled were Duckbills and Mouthpiece valves…...Little did I know there was a HUGE learning curve when making parts from rubber….I was still trying to duplicate the original and not thinking forward to improving what was there.
In my ignorance I made some pencil drawings of mouthpiece valves and provided dimensions as best I could and started asking for quotes from suppliers I could find through Thomas Registry.
This turned into a whole other nightmare of questions I was not smart enough to answer...What durometer do you want?  What is the shrinkage factor? What is acceptable sidewall deflection etc etc…...Engineers like Luis answer stuff like this in their sleep but I had NO CLUE what to tell the manufactures.
So I gathered up a few of the very best valves I could get my hands on and sent them to people that offered to bid….Once again I learned you can’t just send in a part and say “Make it just like this or better”  …..The ones that would use the samples charged a large fee to Reverse Engineer the valves before quoting….I finally bit the bullet and paid a company to dissect the mouthpiece valves and reproduce them. And as it turned out I got a reproduction of the same flat valve that had been used for 50 years and along with it, the same failures as they had….They deformed easily, didn’t last that long and the sealing was marginal. BUT they were new and fit the wagon wheels correctly and were much better than crusty old valves.

Duckbills…. At the same time I had contracted with a company who build rubber molding for the auto industry outside of Detroit to reproduce them. They were using a dip process similar to making a wax candle. The finished product was more flexible and much better that the crusty old ones but the finished product was plagued with inconsistency. More than a third of them were too thick OR thin in places and could not be used or sold. I confronted the company about it and was told, the waste percentage was acceptable in their opinion and if I didn’t like it, I could take my business elsewhere and they were tired of listening to my complaints…...I was basically screwed as I had already paid a small fortune for the form used to make them and was out of $$$ to go anything else.
The ones that were ok worked fine and I had NEW duckbills to put in customers regulators. 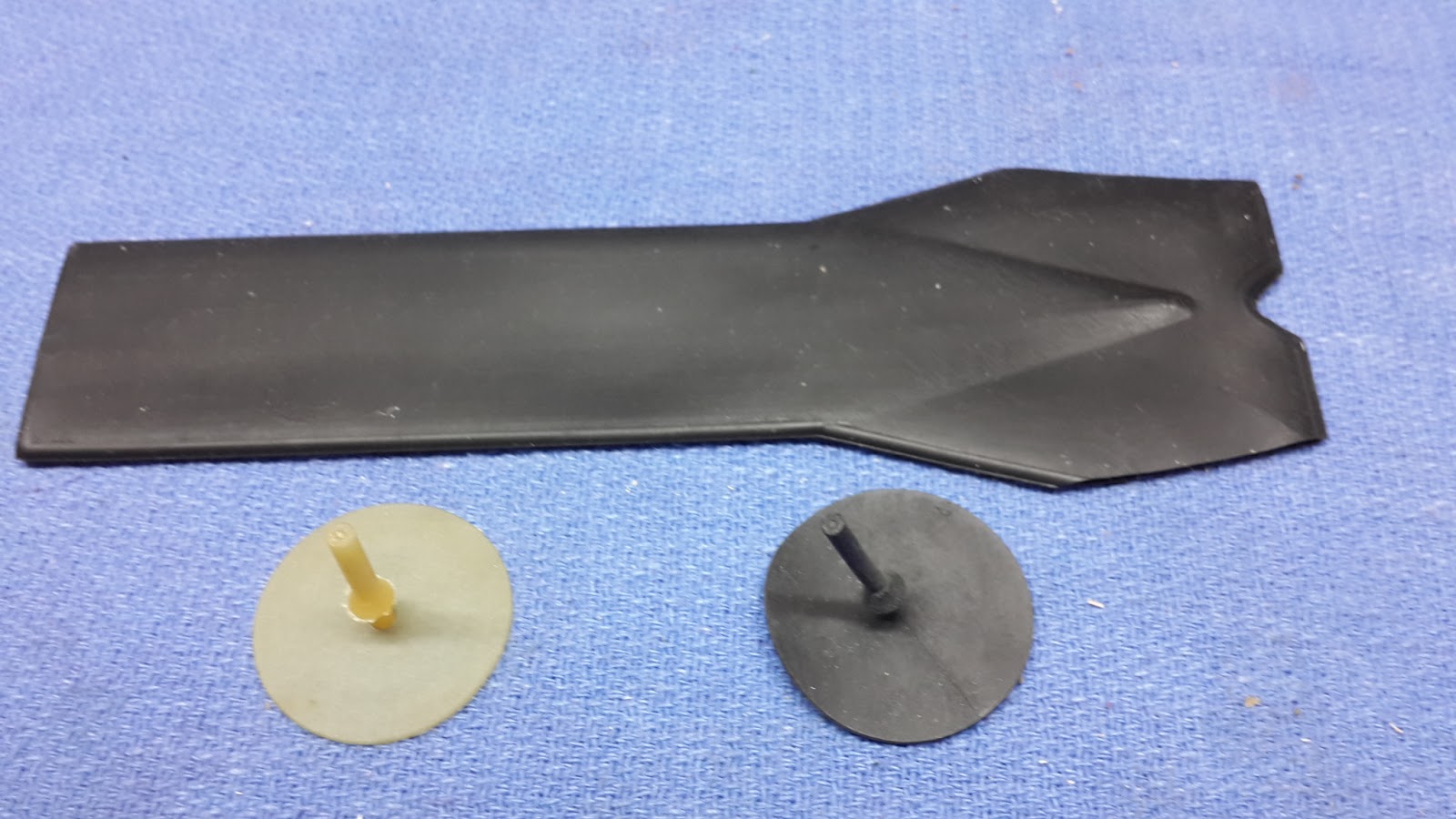 Main Diaphragm…… I can’t take credit for the initial legwork on these as Ryan Spence from Flashback Scuba had given me a couple of examples he had made from clear Silicone and some contacts with a company willing to build them….Thank you Ryan!
Note: Never tell a manufacture that you are building parts for SCUBA or life support equipment as 99% of them will run like you poured boiling oil on them…..
My venture with the company he suggested bore fruit right from the start...They did indeed make the silicone section of the diaphragm but the challenge was correcting the outer edge of them. All the examples I had were USED and had been compressed in cans for 50 plus years and when the drawing was made it reflected this…...Unfortunately I had already paid 5k for the mold and the revisions to get it right cost me half again as much.
Second issue was getting the center discs made….A supplier for the stainless disc was no problem but finding someone who still had BROWN phenolic material to duplicate the single stage diaphragms was impossible…..I was listening to too many “Experts” in the double hose world telling me that if the parts were not exactly like the originals that no one would buy them….
My vendor had sheet after sheet of phenolic material but it was yellow...I finally bit the bullet and had them made and hoped that they were accepted by the end user.
The sample diaphragms were fantastic and you could easily measure the benefit in lowering the work of breathing with a magnehelic. I was ecstatic to say the least!  Once they produced the first 200 diaphragm discs I had to use adhesive to attach the center disc in each one of them and then put a weight on top to hold it in place for 48 hours.  So my house had folding tables setup all around and smelled like solvent for weeks while I let the adhesive for the center disc cure. 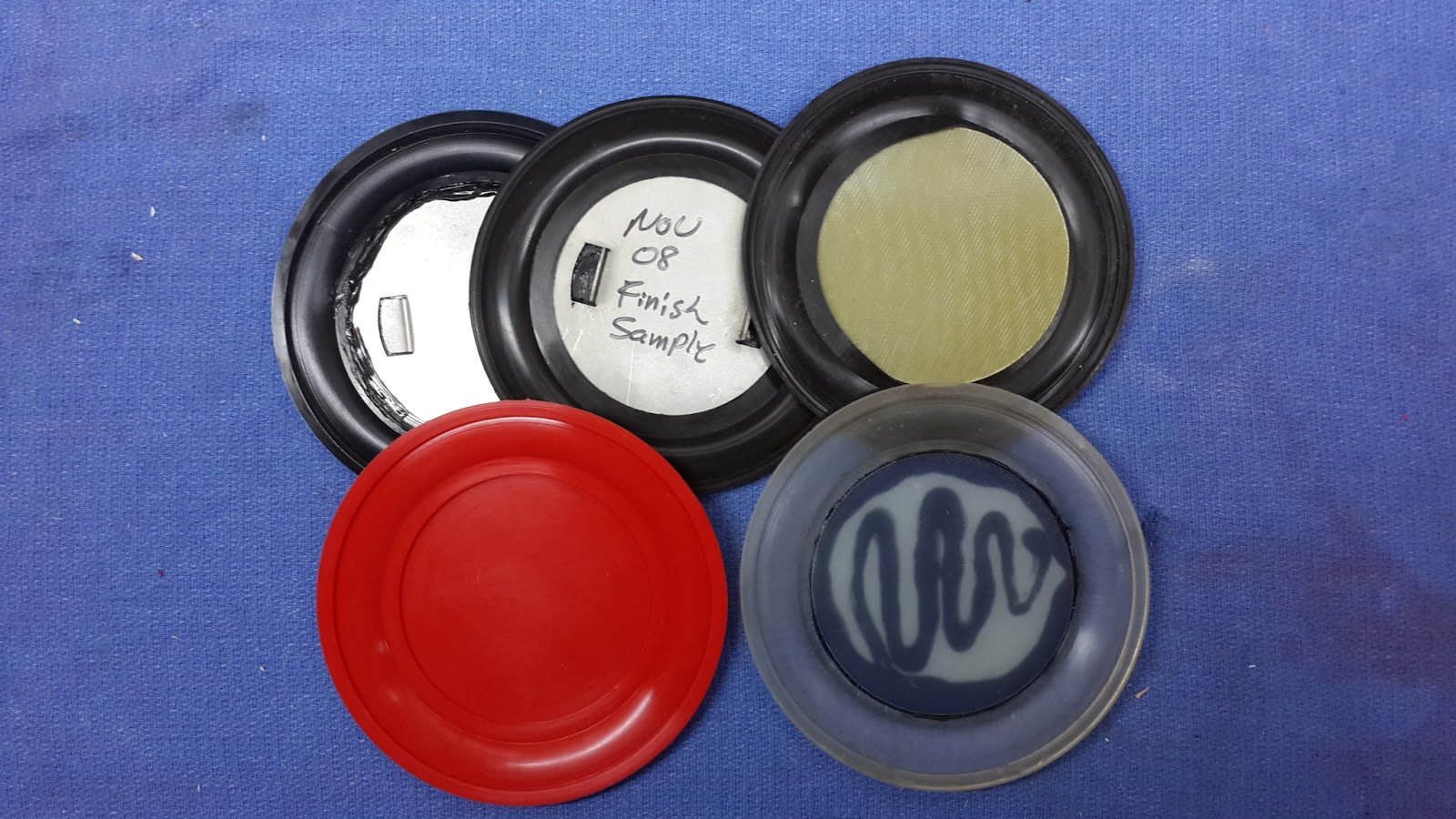 Three more revisions to the reproduction diaphragm have been made since the beginning and each has improved regulator performance...The above shows various samples and revisions.
Posted by Unknown at 4:15 AM