Hookah Me up with a Banjo...My Timeline Page Two

Luis and I were talking the other day and he brought up that VDH had been going for more than a decade now a thought it might be nice to share some of the highlights for all the new double hose divers out there who have not been around since day one. My plan is to cover a few things at a time and post them on the message forum so those with a better memory than mine can share some insight and give some other interesting bits of information.


When the DA Aqua-Master was introduced it had a fitting on the main body that allowed it to be attached to a hookah unit or surface supplied air. There was even a kit from USD for converting your existing DA to this type of unit called The Hookah Master  I still reproduce the plug and Alan makes the harness so diving this way is still an option!
Side Note: The Navy never asked for a hookah port and from period information saw no benefit from having it on the regulator.
Divers quickly figured out ways on their own to adapt the hookah port to allow access to low pressure air. In the early days it was often used to maintain ambient pressure in camera housings. (see Basic Scuba for more info) and later for BCD, Drysuit and Octopus 2nd stages.  The fitting on the back of the DA (and Royal) is an Oxygen "B" which is not normally used with SCUBA equipment and I don't really know why they chose it to begin with.
When double hose diving started gaining popularity again a demand from the community to produce this type fitting began to emerge. 2004 if I remember correctly someone gave Chuck one of the brass fittings in the picture below. It was made by Amazon Hose (I have a copy of the invoice) and I decided to have a couple of dozen made and try and sell them with a couple of other parts I was working on for the double hose community. At this time I had no website and was selling things by word of mouth and on the message forum at Vintage Scuba Supply. 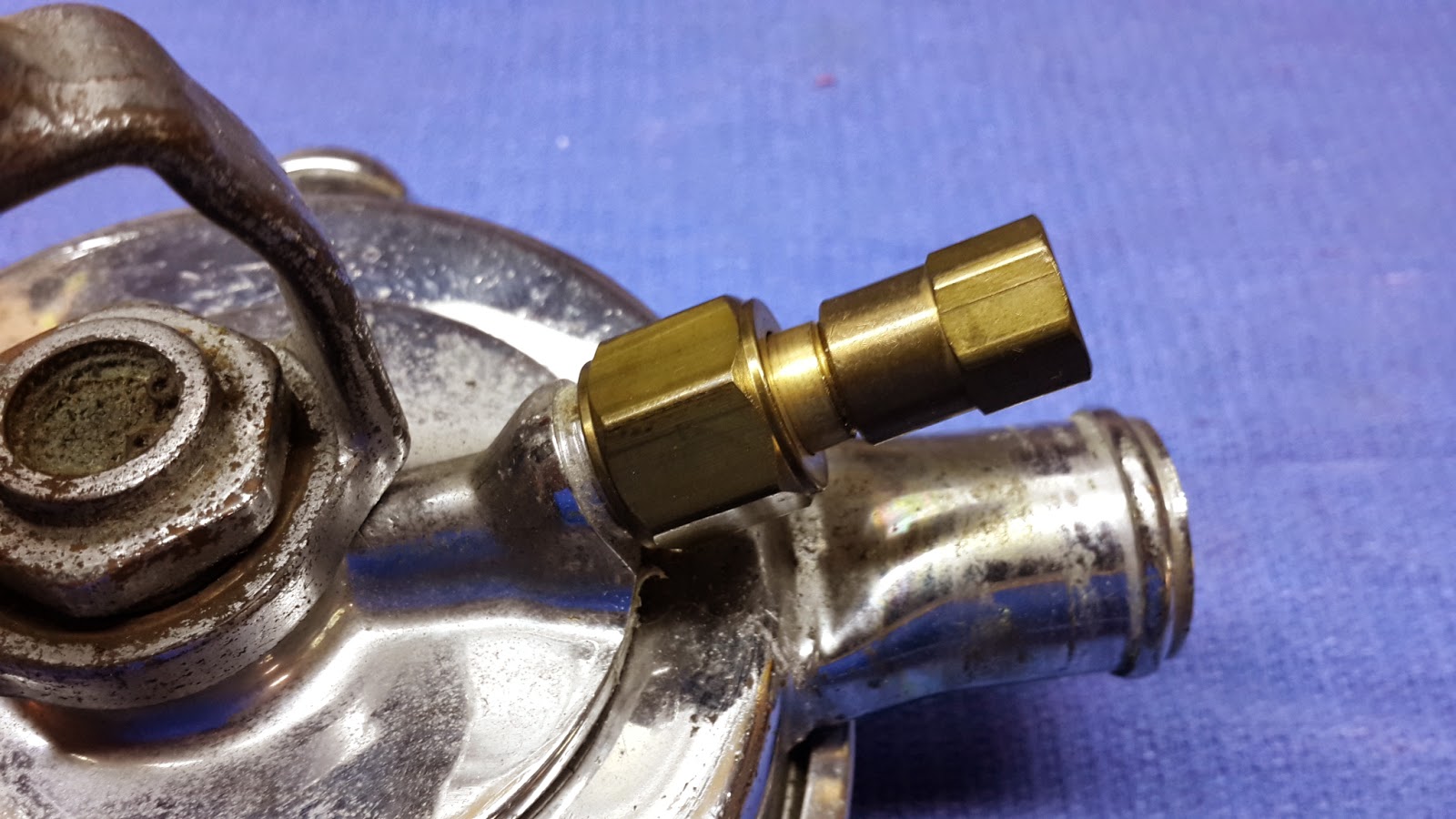 The hookah port adaptors were an immediate success and divers were adding three way swivels to them and running all kinds of stuff from their two stage double hoses. I parlayed the minimal profit from them and started working on other items the community was begging for but no one was making.
Things were going along well and I even had time to put up a rudimentary website to sell the few items I had managed to source or reproduce. I was even lucky enough to acquire my first mentally unstable customer who's delusion of grandeur propelled him to threaten me with everything from lawsuits to incarceration for stealing his ideas and for almost killing him with parts I sold him but that he never actually used....Never a dull moment.
Next a diver on Vintage Scuba Supply came up with the idea to take a nut and machine it to an Oxygen "B" fitting on one side and on the backside to accept a 3/8" o-ring hose which is standard for low pressure scuba.
Great idea as it shortened the fitting and eliminated the threaded section of the brass one. Everything would have worked out great and I would have been happy to host his idea on my site and support his effort as I was doing for others in the community already.  The problem was, in his very first post about the new fitting to the public he claimed that my brass hookah port adaptor was poorly made and less than desirable (Yes I kept the post) As negative advertising often does this one backfired immediately. There was nothing wrong with the brass fitting. As simple as it was it worked just fine and I was never aware of any problems whatsoever with them.
After consulting with an attorney on the subject and finding out out you can't patent industry standard fittings (why you can't is much more complicated), I contacted my local supplier and had hundreds of nuts machined and gave them away for the price of postage. Yes it cost me $$$ and in hindsight I wish it would not have gone down that way but it was the principal of the whole thing.
Almost a decade later it remains unchanged and I have no plans on revising it. Over the years I have even purchased regulators that still had BOTH types of adaptor ideas on the hookah port from the early days.  One was from the famed underwater photographer Stan Waterman who supposedly used it to hookup his drysuit while filming under the arctic ice. 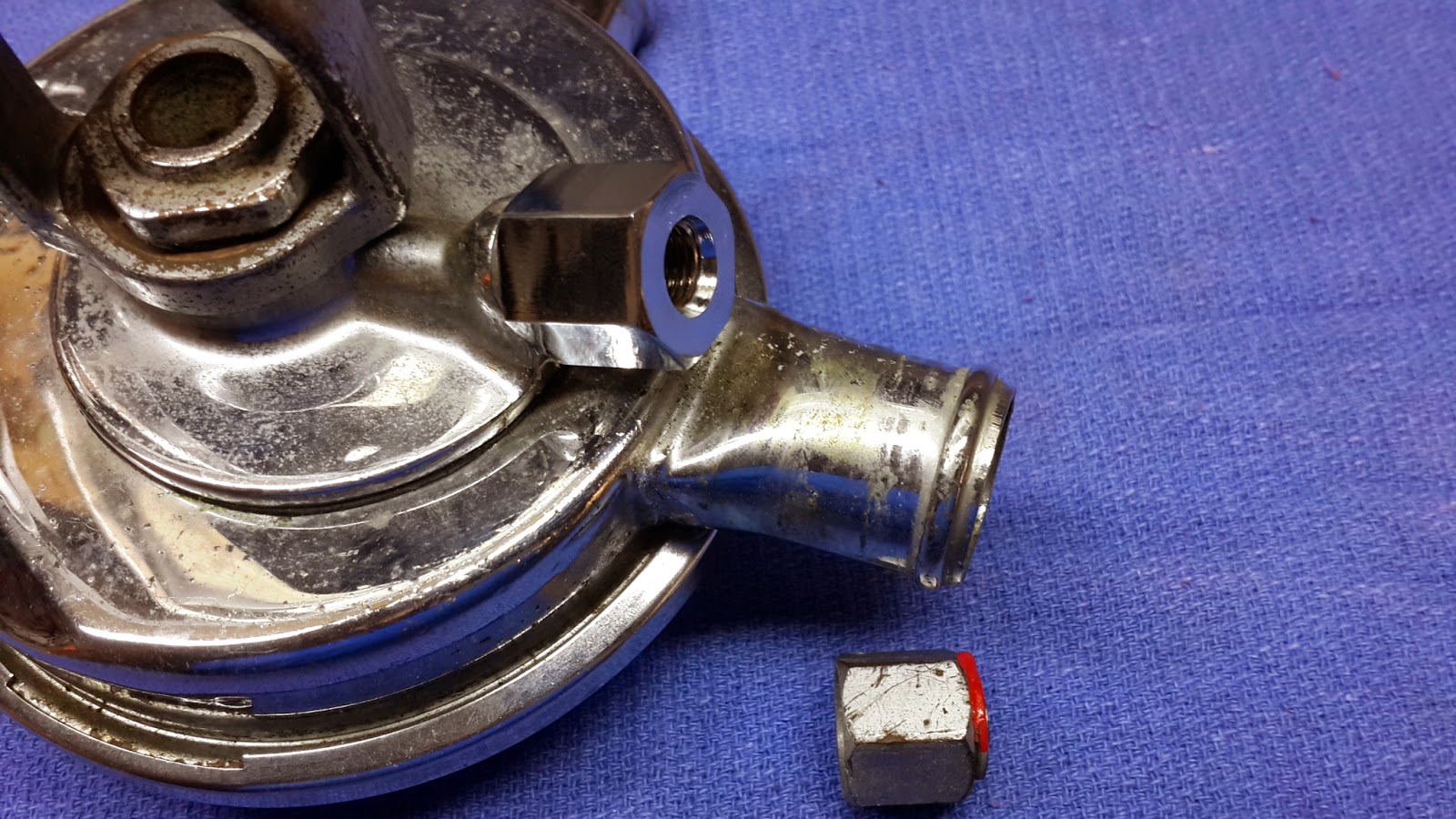 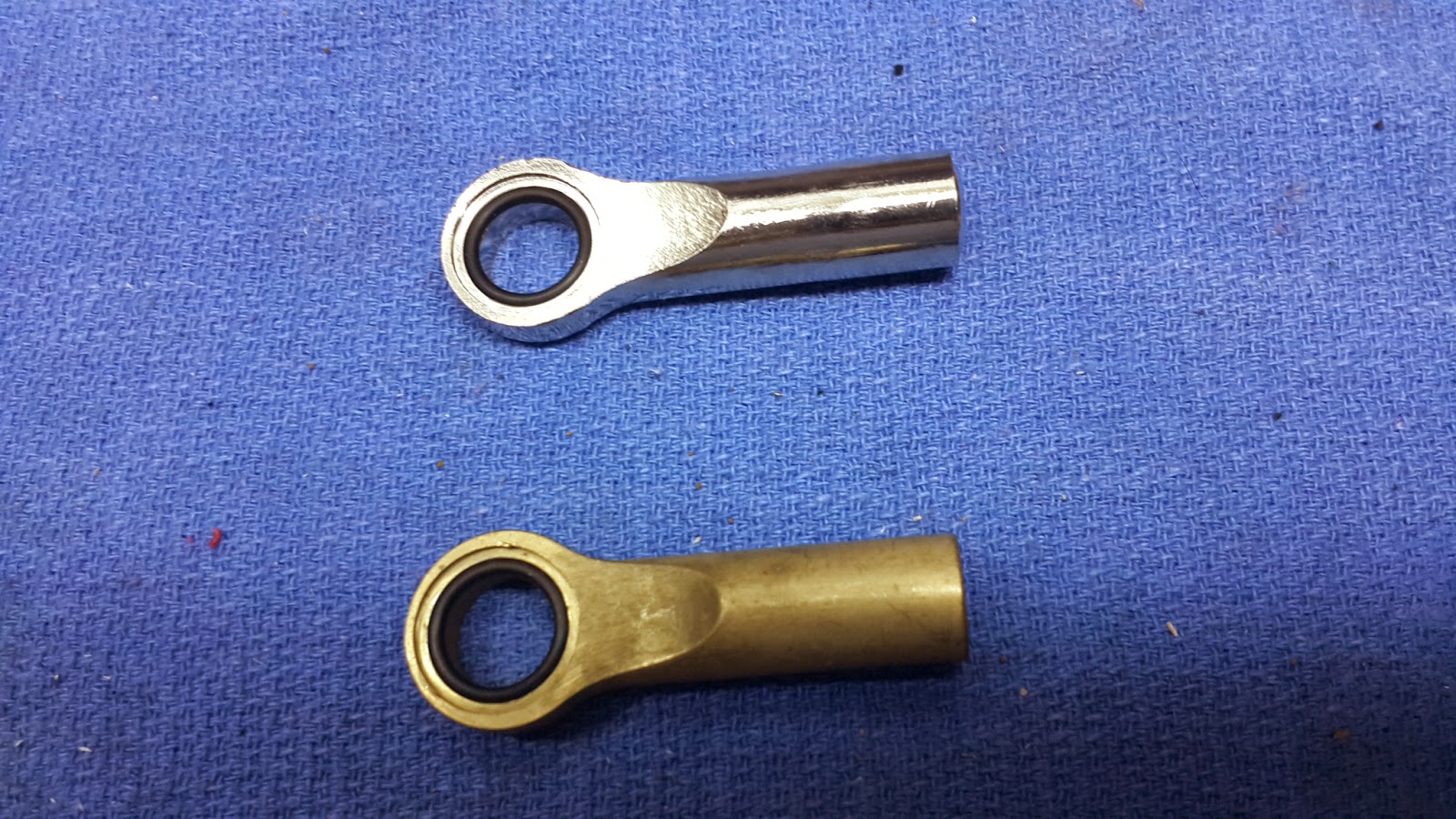 Banjo fittings allow you to use a pressure gauge with your double hose providing the regulator has a long yoke on it which allows enough clearance between the valve and the first stage to sandwich it between them. I'm not sure what year USD put them in their catalog but suffice to say finding one a decade ago was tough and when you did find them prices ran around $100.00 for a NOS one.
I entered into an agreement with a "Friend" at the time and supplied him with an original that I had sourced along with some cold hard cash and he had a machinist friend make some up for us out of naval brass.  My "Friend" and I agreed we would sell them at X price and as long as we kept to that price we would make about $15.00 profit on each one we sold.
I got the word out on the banjos and all was going along well for about 24hrs when I got an E-mail from a diver overseas asking me why my "Friend" was offering the banjo fittings substantially cheaper than I was?  When confronted my "Friend" advised me that our agreement on price did not apply to sales outside the states......I think you can see where this was going......And went.....
After producing the first banjo's in brass I went on to make them in chrome plated brass like the originals and then in stainless steel. I have always had challenges finding a chrome shop that could do good quality work so your banjo may be chrome or stainless depending on the year. One is no better than the other and they do their job keeping double hose divers informed of cylinder pressure. 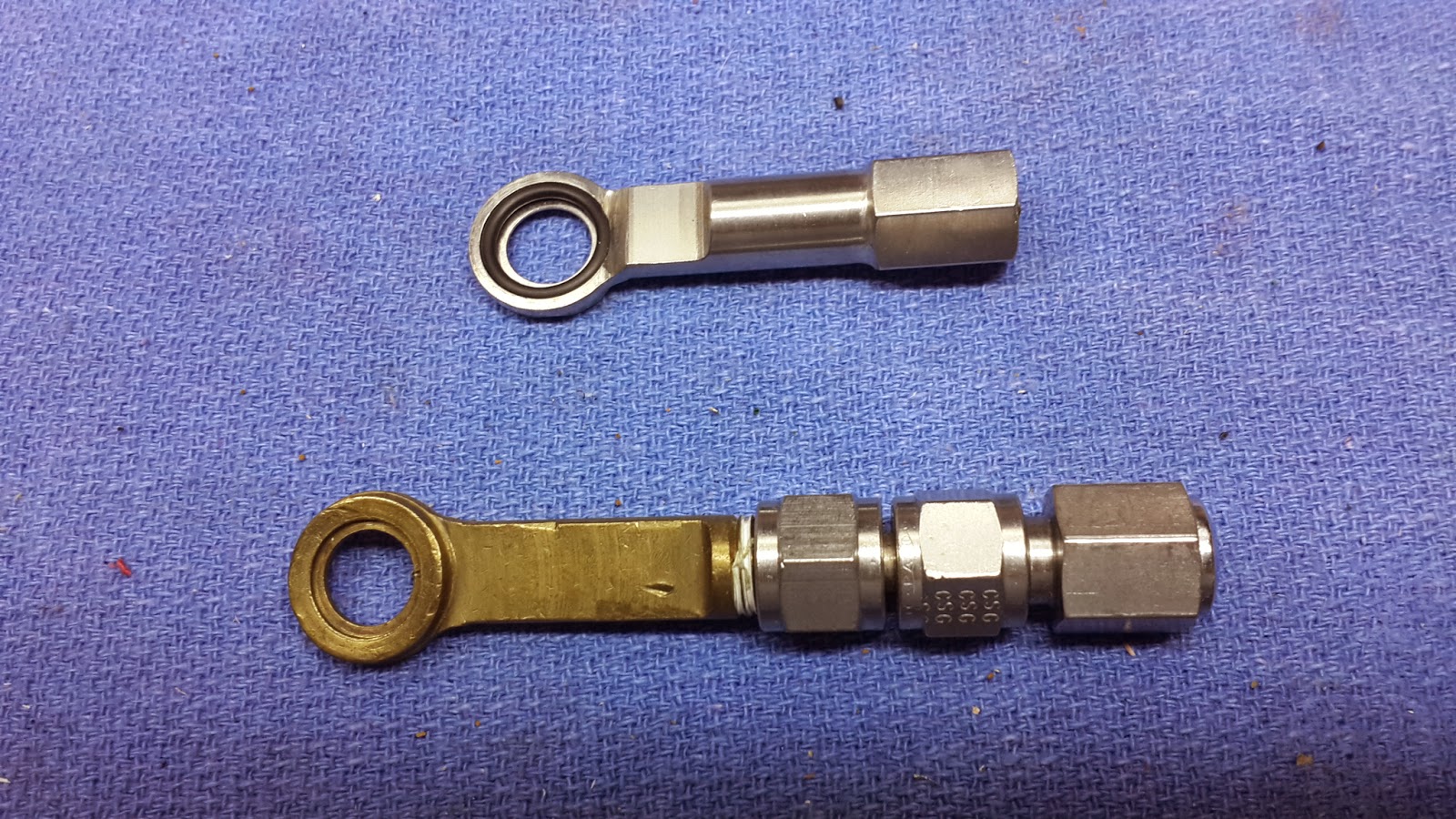 In the early 50's a company called Mar Mac advertised a banjo fitting in Skin Diver that was much thinner and would work with most any regulator.  If my memory serves me correct I got an original from Sea Hunt Jerry in trade for a used Buick and a few gallons of Kemps Cow ice cream.... The original design was not so great and it was very temperamental to use.  My choice to reproduce it was simply out of desire to get a banjo fitting out to all the divers hollering for one who didn't have a long yoke on their regulator but wanted to use a pressure gauge.